BLOG POST: What Paintball Taught Me About Taking Risks and Playing it Safe 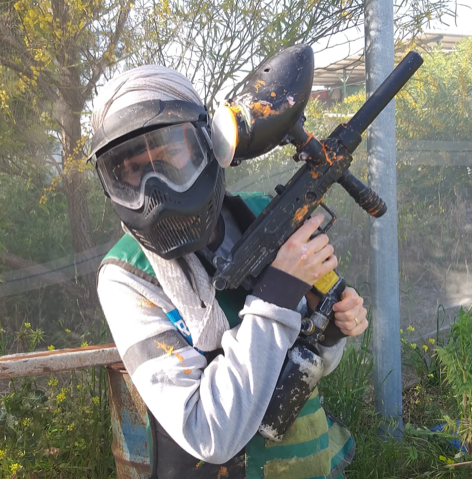 Don’t get me wrong. I don’t usually do stuff like this.

Passover vacation is usually a laid-back, relaxing time for our family. We stay home hanging out, go for an occasional drive, play Rummy-Q, have a barbecue or two, and let the kids enjoy their video games.

But this year I wanted to spice things up, do something different, more exciting.

Some people like extreme sports, hot-air balloon rides, skydiving. The most adrenaline-pumping activity I would probably allow myself to do these days is take a cold shower before doing laps in the pool.

When my husband considered what to do on his time off, he decided to play paintball with our two teenage boys. So I arranged the plans. But when the guy on the phone told me that it wouldn’t really work for three people, what could I do? I gulped and volunteered. My kids had told me that if the balls hit your arms or legs, it would hurt.

I pictured myself wearing the necessary equipment: a thick dark vest, black helmet and face mask, covered with orange and green goo dripping down my body, looking something like Rambo in Armageddon meets Ringley Brothers Circus. Yet I was willing to give up my comfort zone so that my family could have an hour’s worth of entertainment.

We arrived at the paintball place, a small family-run setup in a nearby village located behind a small petting zoo. The paintball arena was a small field of weeds peppered with rusty oil cans and a couple of broken down cars arranged as a battle zone. Two flags stood in “safe zones” on either end ready to be captured. It looked simple enough. But a little scary.

A family of eight was ready to take the field. The owner asked them if we could join their round, as it would be more fun for us. I noticed that most of them were kids younger than mine and I felt less hesitant. We put on our gear. Green team, black team. Helmets with face masks. Now I held a large gun heavily loaded with a hundred paintballs. Now I was feeling a little more confident and apologized to the kids in advance for shooting them.

We took the field. Walking through the weeds and rusty oil cans I felt more exposed and began to get anxious. The paintball gun was heavy, and I wasn’t so sure of my aim. I went behind the oil can fort in the back, where the flag was. The safe zone. I could hide there!

The whistle blew. Members of the other team ran towards our side, shouting. I heard shots. I felt the “ping!” of the paintballs ricocheting against the oil cans I was hiding behind. An image of War is Hell flashed in my head. I panicked.

No way, I’m not doing this!

But it was too late.

I had to stay.

I had to figure out what to do.. quickly.

Then I saw my husband, who was hiding behind a barrel, raise his hand. The signal meant he had been “neutralized” by a paintball and couldn’t continue playing. He must be tagged by a member of the team to continue the game. Nobody noticed him. It was up to me!

I set my eyes on a nearby oil can barrier and ran over, totally exposed to the game, my legs feeling heavy. Bullets flew and I expected to feel a pang but I arrived at my target untouched. I was safe!

Staying low, I waddled over to my husband like a penguin on Red Bull and stopped behind him, both of us on the ground. I tagged him back in. Bullets continued to zing and ping.

Then I got hit. I put up my hand. He tagged me back in.

I went behind the safe zone to recover for a few moments. Then I decided I would try shooting. I was starting to see how this could actually be fun. I saw a figure, hiding behind one of the cars, shooting at my husband. I aimed. Ping! My husband’s hand went up. Oops.

I wondered how it would sound if I told my friends I shot my husband over vacation.

So now I had to go save him from my mistake. I left my gun behind to lighten up my load and ran over to tag him in. He told me i was doing great although in the stress of the moment I felt like I wasn’t.

Finally someone captured the flag and the game was over. We had won. I was relieved.

Later after the game, which I swore I would never do again, I enjoyed knocking down soda bottles with my leftover bullets. On the ride home I had time to reflect on my experience.

In this environment, I was able to experiment and test my perceived limits. I could have stayed in the safe zone and watched from the sidelines from that first moment of panic. But because I chose to stay in the game, I came away with some positive lessons. First, I never thought I would ever play paintball, and here I was doing it. Next, I was able to make quick decisions. I also came out from hiding and took a chance so I could help a member of my team. And most importantly, I tried the best I could with what I had in order to be a part of the game and achieve a common goal.

This experience reminded me of being an entrepreneur, which inspired me to write this post in the first place. When we choose to stay in our comfort zone, we aren’t open to new possibilities or create opportunities to learn, grow as a person, or help others. And whenever we take chances by exposing ourselves to the environment with what we have to offer, then we make our best contribution to our prospects and clients and to the world. Finally, I am reminded to continually reframe “success” as stepping out beyond my perceived limitations and trying my best.

So if you find yourself on a paintball field, or in any area of life or business where you have the opportunity to grow and move beyond your comfort zone, just remember this: If I can do it, so can you.